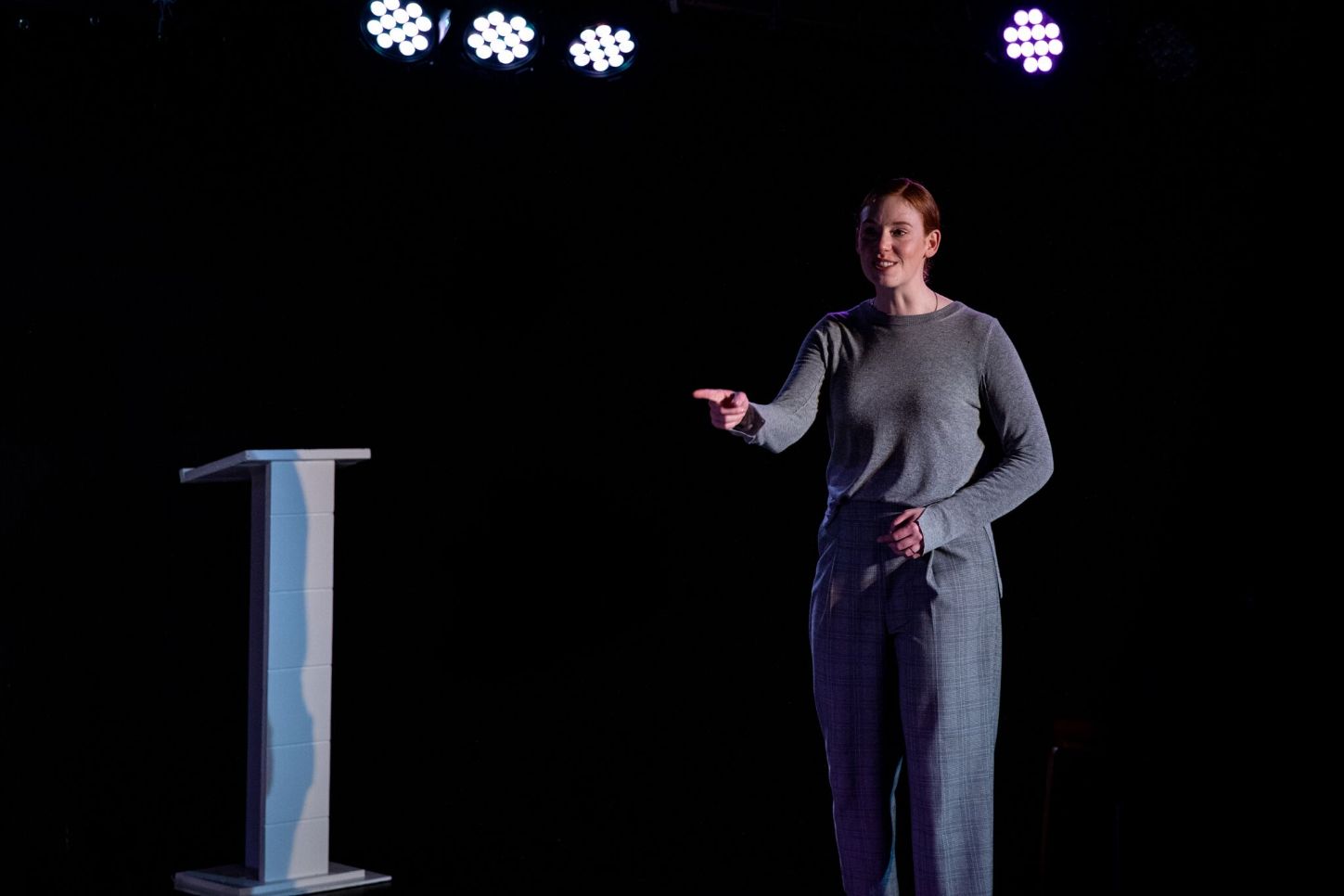 NGYT are delighted to be supporting the work of Unlikely Productions ahead of their much anticipated theatrical arrival in Luton.
Take a read of our interviews with Hugo Chiarella and Gabrielle Scawthorn talking all things 'The Apologists' and find out what we can expect to see on February 27th at The Hat Factory in Luton.

Q1. Hi Gabrielle, so please can you introduce yourself and tell us a little about your role in The Apologists?

I moved to the UK from Australia two years ago and started developing an idea for a one woman show based on three very different public apologies. I didn't want to write the pieces myself, as I thought it would be a good opportunity to work with local London writers (so I could meet people really). So we (me and my producer) put out a brief and found three amazing writers to work with. We then had several workshops to develop the pieces for me to perform. So I created the concept for the show, developed the three monologues with the writers and I perform the show.

Q2. What are the challenges of playing 3 characters in one show?

Well there's the obvious technicalities of playing three characters; costume changes, vocal and mannerism change for all three so the audience can buy into the idea of meeting three different characters.  But the thing I found quite difficult is my pre-show routine. I usually spend a little time in my warm up for any show I do, dropping into my (usually singular) character. I don't really have the luxury of that. Otherwise my warm-up will take half of my day. So I have had to develop short cuts on how to drop into that character within the thirty second transition.

Q3. Your performance has been described as an acting masterclass so what advice can you give to young aspiring actors when tackling monologues?

Q4. Other than to see you....why should someone book a ticket to see The Apologists?

I think the writers have created three utterly engrossing monologues. When I was learning the script, I would learn a few pages at a time, and I would run lines with a friend at a job I was doing. When I stopped and said "thats all I know so far". They replied "Hurry up and learn the rest of it. I NEED to know what happens".

Q5. Any final actor/industry-esque type pointers for anyone hoping to follow in your footsteps?

If people aren't inviting you to the ball, dance in a ball gown at home.
Meaning; if main stage companies aren't handing you opportunities, make your own. I am utterly bowled over by how many opportunities this country provides for new work and artists. So make your own work, find a scratch night somewhere and get it out in front of people. This will help you develop new skills, maintain your performing muscle and help you stay in shape so that when someone does hand you an opportunity you are ready to take it.
Also go and see as many shows as you can. You will see shows you love and shows you don't love so much but you will learn from all. Also in my experience if you open an industry meet with "I saw your show..." its an easier conversation. The Vaults Festival is just starting in London so start there!

A very fitting mention too as Chalkline Theatre (one of our associate companies) are making their Vaults debut this year.

Q1. So Hugo tell us a little bit about yourself and your involvement with The Apologists

My name is Hugo Chiarella. My background is as a writer, producer and performer. I am one half of Unlikely Productions, the producer of The Apologists . I am also the outgoing development producer at Fuel and the incoming resident director of the UK tour of Les Miserable.

Unlikely Productions is company that performer, Gabrielle Scawthorn, and I began together to create and produce work independently. We are both from Australia originally and had predominantly been making work there previously. We were keen to develop some work of our own in the UK and so we conceived of The Apologists.  Gab and I had both been really interested in public apologies. We felt like we were seeing them all the time and they were being deconstructed by public in the way one might deconstruct a piece of theatre. It felt like a really fitting subject for a series of monologues. The public apology is an act of solo performance in and of itself. There are so many questions around the act of apology that felt really ripe for drama. Who is the beneficiary of an apology? What does it change? What makes an apology successful?
We decided to commission three writers, Iskandar Sharazuddin, Cordelia O'Neill and Lucinda Burnett to each write a 20 minute monologue tackling this theme from a different perspective. Gabrielle worked with the writers as well as with directors Kate Budgen and Jane Moriarty to workshop and develop each of the pieces. I first produced the show for the  2019 VAULT Festival, directed by Jane Moriarty and performed by Gabrielle. We've now been fortunate enough to receive Arts Council England Funding to bring the show to The Hat Factory Arts Centre in Luton followed by a short season at The Omnibus Theatre in London.

Q2. So in short what is the show about and who is it most likely to appeal to in our town?

The Apologists  consists of three monologues by three different writers each looking at  a story about a female character tackling the expectations and repercussions of the act of public apology.  Each of the pieces is very different, both in their tone and their approach to the central theme. But I think the common thread between the three monologues is the question of whether we are ever truly capable of taking responsibility for our actions and what cost that comes at. These are also stories about the ways in which each of these women inhabit positions of power, and the specifically gendered pressures and expectations that come alongside that.
I think it is a show that will appeal to people with a particular interest in politics, feminism and new writing. These are topical and politically engaged stories that are interested in the fraught relationship between the public and the personal. But these are also monologues that hinge on moments of enormous personal conflict and human drama, and for that reason they are enormously accessible pieces of storytelling for anyone who enjoys a gripping night at the theatre.

Q3. We have heard incredible things about the lead actress. What can Lutons young acting talent expect to see and learn from this performance?

Gabrielle gives a powerhouse performance in this show. It's a very demanding hour for her. Not only does she have to inhabit three very different characters for each of the monologues, but she is also often bringing to life the other characters that they come into contact with. We had a lot of acting students come to the show when it was at The VAULT Festival. I think it is a really valuable demonstration of the power of specificity and attention to detail in a performance. But more than that, it is a real balancing between emotional access and technical control, and I think that is something that's really quite rare to see.

Q4. Luton's level of arts engagement has been slowly on the march over the last few years so what final words would you say to all those who are considering buying a ticket? Give 'em a nudge so we make sure no one misses out

Come and witness an exciting team of incredible artists staging gripping new work. This is theatre that feels relevant, urgent and alive. We're in Luton for one night only and we would love to connect with anyone and everyone who cares about theatre, storytelling and new writing. Come by, see some great theatre, say hello after. Let's start a conversation on...
Twitter
Facebook
Instagram
Book Tickets