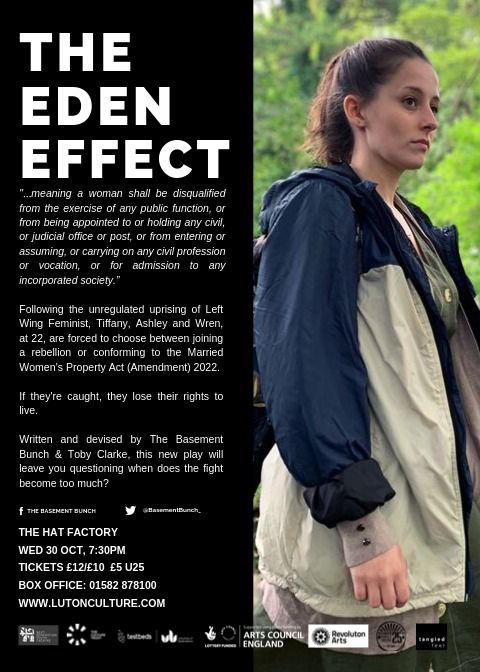 Take a read of our Interview with our Associate Company- The Basement Bunch ahead of their homecoming show.

Q1. So what have you been up to recently? It feels like forever since we had a good catch up.

Where to start! We have been developing our ACE funded show The Eden Effect this year, which debuted at Camden People's Theatre in May. We're also very excited to be bringing the show to The Hat Factory and The Curve Theatre in Leicester.

We've been busy planning the next year ahead and what we want to achieve. You’ll be seeing a lot more from our film strand this year as we’re now joined by a new executive member, Shakira Francis who will be leading on these projects.

We are also planning to revisit our first show as The Basement Bunch... stay tuned!

Q2. So The Eden Effect is coming to Luton. Tell us a little about the show and what we can expect.

The Eden Effect is about three women adapting to their new lives after a new law is implemented. We wanted to explore womanhood whilst shining a light on the society we live in. The #MeToo movement opened up so many conversations about women's experiences. This topic inspired us to research and explore the social and political aspect of feminism and imagine an alternate reality that echoes the chaos of today.

Q3. And how about the process as a company? How did you reach this point?

We started by imagining what this world looked like. Who are these women and how have they all been effected by this law? There were lots of discussions, followed by lots of trying things out and experimenting. Toby Clarke has written us a brilliant script based on our ideas. We're deep into our rehearsal process now but we're still finding ourselves shifting things about/making changes until it feels right!

Q4. What would you like to say directly to your #NGYTfamily and local community. Why should we buy tickets....if we haven't already?

As young women from Luton, our town and the people in it mean the world to us! We would love to see some familiar faces (our NGYT family) in the audience! We believe The Eden Effect is a show that will keep audience members on the edge of their seats and will make them think. Come along for a night of local theatre by local artists!

PS. We're so proud to be Associate Artists of NGYT. A massive thank you to David and Laura for all of the support and love. #ngytfamily always!

PLEASE NOTE: The show is for 14+ (contains strobe, violence and sexual references) 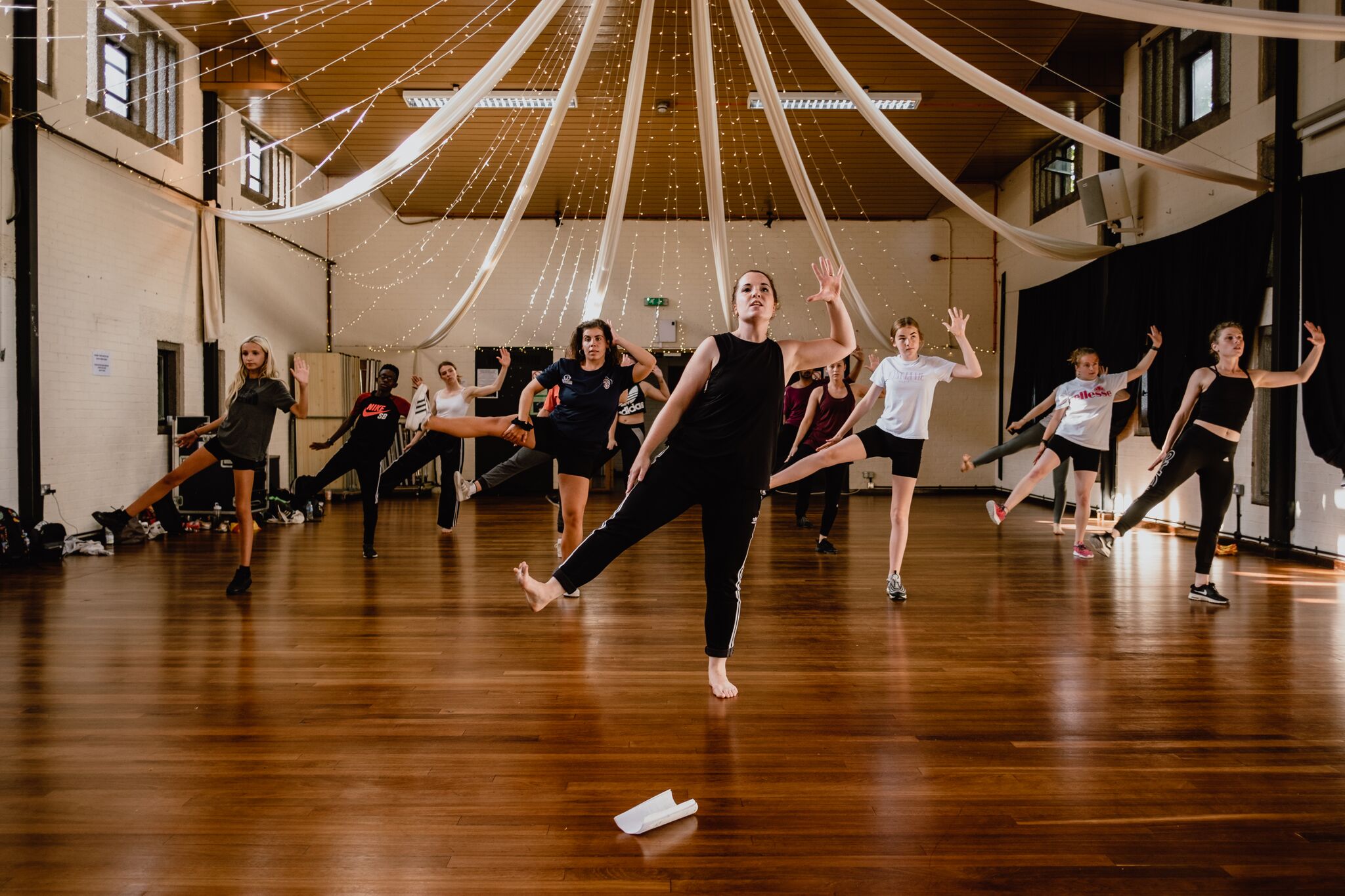 We are delighted to announce that Laura (our co-founder) has been nominated for a One Dance UK Award. Currently we are awaiting the category and further information about how people can vote for Laura to win.
We don't know who put Laura forward but Laura is truly touched and sends her love and thanks.

We are delighted to share with you this hugely exciting and important event coming to Luton as part of the People Power Passion Programme.
We are incredibly proud of all the NGYT young people that are involved and can't wait to see the whole cast on Friday 16th & Saturday 17th August 2019 in Luton.
Huge thanks to Marcus and the team for encouraging and supporting our young people to get involved and have their voices heard by their community.

In 1919, during the Luton Peace Riots, 39 people were arrested for standing up for themselves. They were all working class poor. In Justice 39 we meet those brave men and women who ask us: has anything changed? This is a new work developed by Marcus Romer and Simon Poulter as part of People Power Passion, a new programme from Luton Borough Council. Justice 39 is co-commissioned by Revoluton Arts, who are also hosting the artists and some of the workshops.

The production includes new writing by three leading contemporary writers – Roy Williams OBE, Atiha Sen Gupta and James McDermott. With direction by Suzann McLean and music by Bafta winning Sandy Nuttgens.
The artists will work with young people from Luton to connect these historic events with contemporary social justice issues of our time. The work asks two simple questions – from 1919 – what did they stand up for? And from 2019 – what would you stand up for now. Take a read of our interview with local actor Shahj as he discusses his debut feature film role.

Q1. So tell us a little bit about yourself for those who don't know you
I'm Shahj Miah, British Bengali Muslim, born and raised in Luton. I'm an aspiring actor and my first credited role is a feature film The Flood opposite Lena Headey from Game of Thrones so I'm very excited about the release.

Q2. so what was your route into acting?
I started by doing as much as I could to hone my skills like going to acting classes and workshops and just generally getting involved in the area of acting. I took the necessary steps in getting a headshot and getting a showreel. I then started to apply for open auditions and applying for small roles mainly uncredited in student films, web series and tv. I was then able to be a background artist for the BBC drama Rellik and the casting agent from this show believed i had the look for the role in The Flood and so put me forward for it. The producer of the The Flood liked me and I was cast as Shakeeb. I was at the right place at the right time.

Q3. You have spoken about ethnic expectations in terms of profession. How has this impacted on your journey so far?
Expectations from my community was a big hindrance as pursuing acting was frowned upon. Having no support and no guidance impacted my journey to be delayed by 15 years. This mentality is changing now and it helps we are being more represented in the media and we have positive role models like Riz Ahmed in the industry.

Q4. Tell us a little bit about your forthcoming film 'The Flood'
The Flood is an immigration drama showing the plight of some refugees and equally showing the hard decisions an immigration officer (played by Lena Headey) needs to make. I play a character called Shakeeb who is a refugee in the Calais camps. He comes into contact with Haile played by Ivanno Jeremiah who is looking to come to England. The film is about Haile' s journey and will be releasing on 21st June.

Q5. What advice would you give to any young local aspiring actors?
I would say get professional training if possible as this will make it easier for you to join spotlight and get representation. If this is not possible then it's about staying persistent and being patient. Get involved in all aspects of this area and don't give up auditioning and honing your skills. Eventually an opportunity will arise. New Views is the National Theatre’s annual playwriting programme for 14 to 19-year-olds. Every year, hundreds of students from across the UK learn about playwriting from some of the finest writers in the industry and write their own 30-minute plays. We are delighted to announce Theatre Company Member Cerys Wrigley made the shortlist with her play 'Background Noise' and her play will be read aloud as a rehearsed reading at The National.